Do you really want to know what I'm thinking about?

How to be chill

Sometimes it’s hard to be a team player

So I spent the past week at a conference with my team. It was a great time, however it was incredibly tiring. See, we didn’t just do the conference work, which was busy and challenging all on it’s own. Actually, it was all day and night, since we had a casino near by.

Each night of the conference we all went to the casino and played roulette and blackjack until midnight at least. Did you know they have “War” as a casino game? Seriously all you have to do is bet on you winning the highest card versus the dealer. It’s an even dollar payout, so I have no idea why you would play this.

Back to the gaming. We would arrive at the casino by 8 or 9 and stay there playing roulette until after midnight. After we won/lost a bunch of money at the tables we would go to the local all night restaurant and eat poutine, pies and milkshakes. Every night. I gained 4 pounds in one week.

I’m going to try an experiment. I’m going to see if I can update my blogs (www.leene.ws and www.lee.elliottfamily.ca) on a weekly or more frequent basis.

I like to write. My wife was published in the Globe and Mail and it inspired me. Not because she was getting all kinds of recognition, compliments and notoriety, but because she was doing something that she enjoyed. To try and challenge myself I submitted two articles to the Globe, neither one was good enough to publish.  However it is a start, and I intend to try and write more, to become better at this craft and hopefully get as good as my wife was in May (she’s even better now!).

So expect more in the coming days, weeks and month(s). I’m going to try.

I think I’m funny, but am I really just an ass?

I like to think that I am fun and funny. That I say and do things to make people laugh because laughing is much more fun than being serious all the time. I like to laugh, I assume others like to do that too.

However, it seems to me that some of the things I do are more ‘ass-like’ than ‘funny-guy’. Recent example comes to mind.

I received a text from a friend that said “Hey, Lee. Think we can meet again soon?” My reply, which I thought at the time was funny: “Awww. You miss me?”, then sure we can get together. Fortunately the person who texted me knows me and I assume likes me and he responded “ha ha, When I can’t talk to you it feels like I can’t breathe”.

More and more I think I’m an ass and not funny. What is the dividing line? If people laugh at you instead of with you? People who mumble under their breath about you? I don’t know.

Either way, I’m going to keep it up because it makes me laugh.

Scenes From a Multiverse – Homeopathy

Damn, Jonathan Rosenberg is awesome! Again, go check out Scenes From a Multiverse! 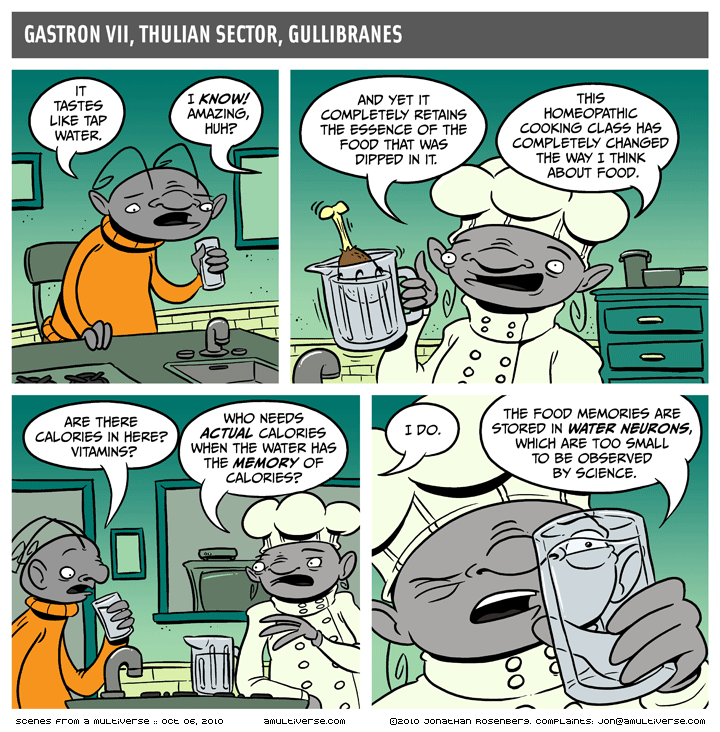 Scenes From a Multiverse

This is such a good comic.
Scenes From A Multiverse » Faithing The Facts 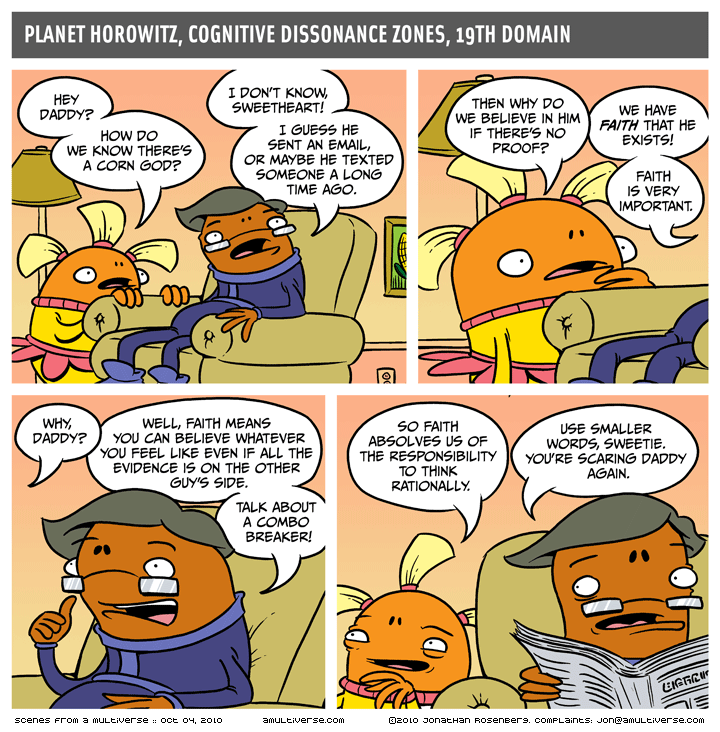 Something I try to live by

I don’t get it

I coach my son’s recreational basketball team. He’s 9, the kids on the team are all 8-10 and play the way kids that age play.  Today was the last day and it really bugged me that not one parent thanked me for coaching, for helping their kids, for the encouragement and support.  Hell, even for simply babysitting their whiny butts.

One kid in particular was a whiny little suck. “I haven’t made any baskets.”, “I suck”, and “I don’t want to play” came out of his mouth virtually every week, and this week was no exception. He actually took himself out of the game and sat dejected on the sidelines. I stopped the game, went over to him and gave him a pep-talk, getting him back on the floor and putting him in a position to score, which he did. His dad watched the whole thing. Nothing. No wonder the kid is the way he is based on the inaction of the father.

Then there are the other coaches. They do NOTHING. I’m the only one that called fouls, that coached both the teams, that played with the kids and tried to teach them something. I hate to even be considered a ‘coach’ if what they were doing was considered to be coaching. It’s not hard. Call a foul. Tell them what they did wrong and help them understand how to do it right.

Finally the parents. We were presenting the awards, photos and talking to the kids about how far they have progressed and they were all chatting and talking above what we were trying to do with THEIR KIDS. I yelled at them. I hate that I had to, but no one else was speaking up.

All of this bugs the crap out of me. Makes me not want to ever coach a team again. Dealing with the little shit kids, the big shit parents and the don’t care a shit coaches.

But I will, because I get to spend more time with my son. I would walk through fire for him, so a whole bunch of me feeling like crap once a week is nothing. I love him.

If I am a traitor… Edward Snowden

Theme by Anders Noren — Up ↑